This cozy Scandinavian Bedroom design is so inspiring because of the cozy and rich colors and textures.

I am READY to redo our bedroom, but anyone who knows me well knows that ya girl has to make a plan before doing anything. I love creating e-designs  because it helps you visualize the final design AND saves you time and money.

If you don’t know how to create an e-design, please reach out to me for some help! I would love to work with you.

I’m walking you through how I planned my future bedroom makeover. If you are designing your bedroom, I hope you find decor inspiration and helpful tips on how to plan a room design.

If you’ve been around here for a while, you might have picked up on the fact that cozy, modern Scandinavian style is my jam. After designing the rest of our house in this style, I wanted to replicate it in my bedroom.

TIP: To make your home feel cohesive, know your style and reflect it throughout your home’s design and decor!

See my tip here on decorating opportunities in a closed floor plan.

When planning a design, it’s important to take inventory of what you already have and decide what you would like to keep and what you’d like to replace.

For my bedroom design, we have older furniture that I’m not ready to replace yet. So, I needed to incorporate these pieces into the design.

One of the main pieces in this bedroom makeover that I had to consider was our headboard. John bought this for me for my birthday when we first moved in and while I’m not someone who holds onto stuff because it has a sentimental value, I wanted to include this in the design instead of purging everything!

While this headboard isn’t one hundred percent my style, I like how it gave a deep contrast and starting point for the rest of my ideas in the room.

Because I knew that I’d be working with lots of whites and beiges in the room, I felt like the headboard would provide a great contrast and anchor to the rest of the cozy, light space.

The next thing I added, of course, is the bed and the bedding I chose. I just switched our comforter to this linen mix from Casaluna at Target.

We have been using it for a little while now and I am lovvvvving the texture! The bottom is rayon, so we sleep cooler. The top is linen– it’s honestly incredible and provides so much coziness in the room!

I chose the natural color for the bedding, which is different from what I normally choose – white bedding. I wanted to layer the bed with a white throw and white decor pillows, so the natural was the perfect compliment. I chose the decor pillow last so that way I could find one that would cohesively tie in the colors of the rest of the room.

The Scandinavian design style is very bright with lots of neutrals! TIP: Save some design decisions for last so they can pair nicely with the rest of the room!

Best Rugs for the Bedroom

When looking for rugs for the bedroom, you need to consider the size of your bed.  For our king size bed, I wanted to find a large 9×12 rug to fit under our bed and tie the room together.

So far, I had the creamy white/natural palette for the bed with a dark grey headboard. I wanted to find a rug that would complement this.

Because the bedding was a solid block of color with no pattern, I wanted to add some depth to the space by finding a rug with a pattern. I searched neutral vintage style rugs to see what would come up and I found two options! I haven’t decided which rug to go with yet, so I’m curious to know which rug is your favorite. Let me know in the comments!

Next up: Nightstands! We’ve had the same $11 nightstands since we first started living together years ago. I am READY for an upgrade!

One thing I’ve been seeing a lot lately that makes a HUGE impact in the bedroom is wide nightstands versus narrow nightstands.

You have your typical-sized nightstands, but if you have the space and it would be to scale with your room, wider nightstands can make the bedroom feel luxurious.

If you’re like me, you use that nightstand as a dumping ground, so the more space the better! I also wanted nightstands that had drawers in them for this purpose — hiding the clutter.

I found these absolutely gorgeous nightstands at Crate and Barrel that are not only wide, have drawers, and are wood, but ALSO have a hole in the back for CHARGERS!

Chargers and cords are the poison of a perfectly staged bedroom. I say staged because you never see cords in the bedroom in magazines, etc. But honestly, that’s how we live! We have cords, books, remotes, snacks (*no judgement!*), so having all the bells and whistles of these nightstands are amazing. The second option I found are these low-profile nightstands from Pottery Barn.

I like that they have drawers and a shelf for storage. The wood is more of blonder tone that has a simple, timeless look.

The Pottery Barn nightstands are not as wide as the Crate and Barrels ones, but they still have that high-quality look.

I kept both nightstand options in the design because at the end of the day, I have to measure that wall and see what will fit and what is to scale with the room. The next part is where the magic of interior decor unfolds.

Since I have the neutrals with the bedding and the rug and the warm wood nightstands, I wanted to bring more balance and contrast to the space by adding in black or dark grey lamps to each nightstand.

Not only does having the same lamp on each side help with symmetry, which our eyeballs love, but it also replicates that dark grey color from the headboard. This causes repetition of color and balance!

I seriously love interior design – it is so much fun to see it all come together! Now to wrap up some final details, I mentioned I wanted to save the decor pillow for last. I wanted to contrast the natural colored comforter with white, which I’ve already done with the throw, and I want to do again with the decor pillow. But not just any white decor pillow – I wanted one that also had *some* black detailing in it so that it also ties the room together with one small, but large!, bow.

So far the best one I found is an outdoor pillow, haha. When I actually turn this e-design into a reality and transform the room, I’ll have to see if I still want this pillow, if it’s soft enough, or if there is a one similar for what I’m going for.

For the final few details, that frankly I am still deciding on, includes the art above the bed and the intricate detailing on the wall.

We absolutely love the beach! Our current bedroom is in the coastal design style. I wanted to find an art piece that reflected the beach, but was still in the warm color palette I was working with.

Finally, I didn’t want the bedroom wall to fall too flat, I didn’t want to overdo it, and I also didn’t want to do the same thing I’ve been seeing all over the internet. I wanted to try something different. I am considering adding some painted wood, or more formally called batten, to the walls to sort of create this “anchor” effect for the bed. I’m still deciding, but feel free to comment your thoughts down below to help me in my decision making!

So far, this is as far as I’ve gotten with this bedroom even though there is a whole other optical view to consider – the wall in front of this one! So I may do a Part 2 of this video soon! Be sure to subscribe on YouTube for updates!

If you’d like me to create an e-design for you, you can view my design services here. As an Amazon affiliate, I may earn from qualifying purchases to compensate my time for linking products for you! Thank you for your support! Read full disclosure. 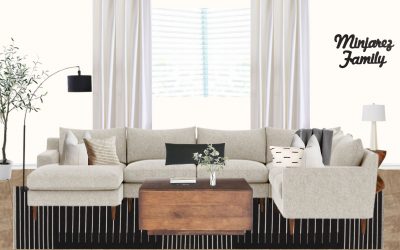 Living Room Makeover Modern Scandinavian - Black, White & Warm InteriorToday, I’m walking you through how I designed a recent client of mine’s living room. This particular client found me on YouTube after seeing some of my other work and wanted me to design her...

END_OF_DOCUMENT_TOKEN_TO_BE_REPLACED 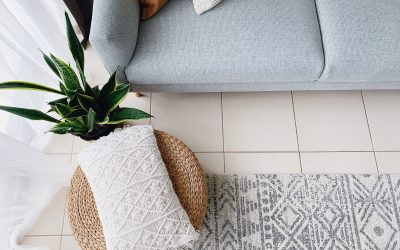 If your room designs are not turning out like you hoped, you might be making one of these common decor mistakes. See what you can do to make your design style turn out like you want.

END_OF_DOCUMENT_TOKEN_TO_BE_REPLACED 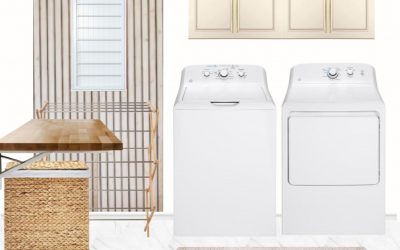 Right now our laundry room is builder grade. It doesn’t really have any special characteristics to it, so I’m ready for this makeover.

As always, the first thing I did was gather inspiration for this small laundry room makeover to build the e-design. 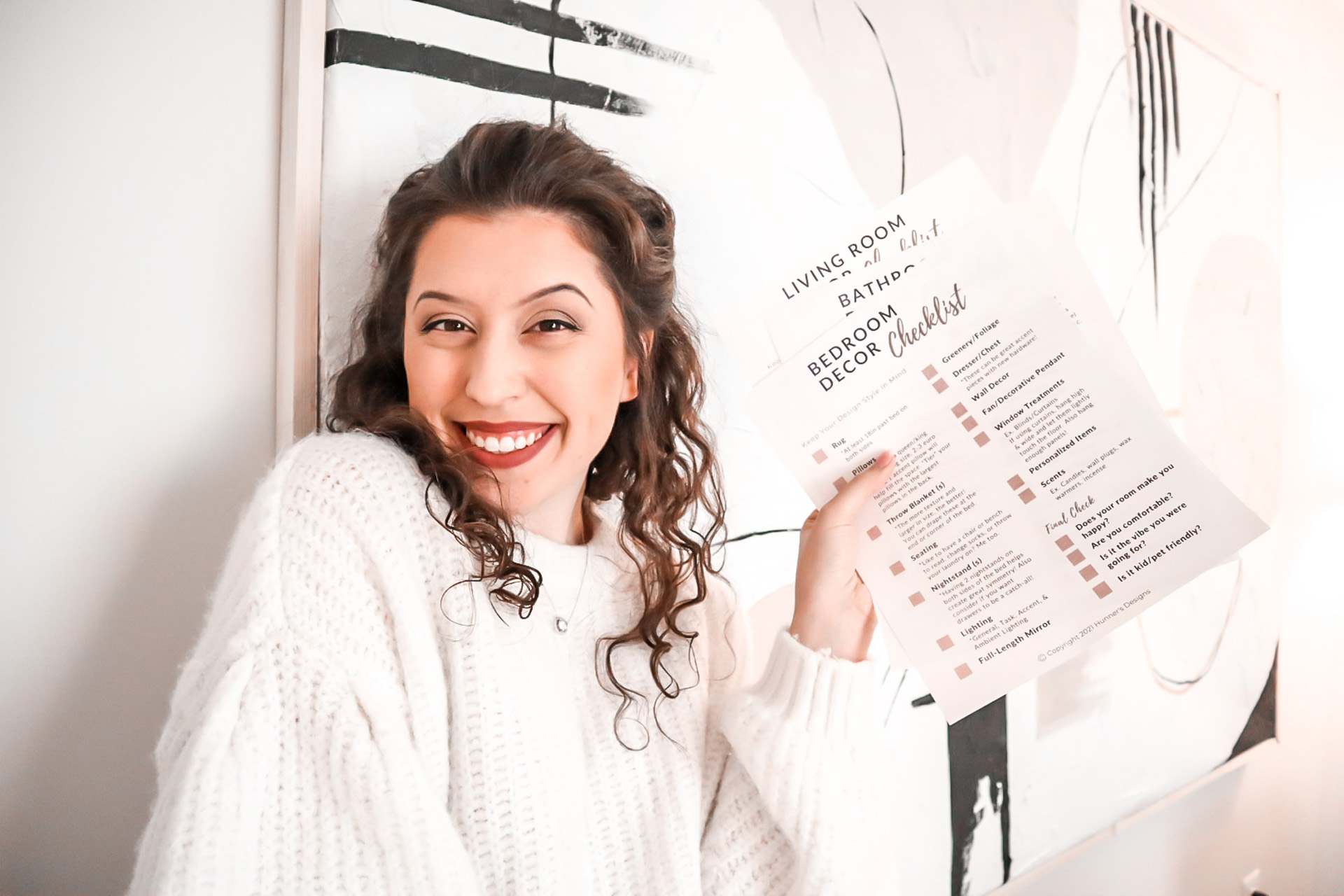 Thanks! Be sure to check your inbox for your decor checklist!